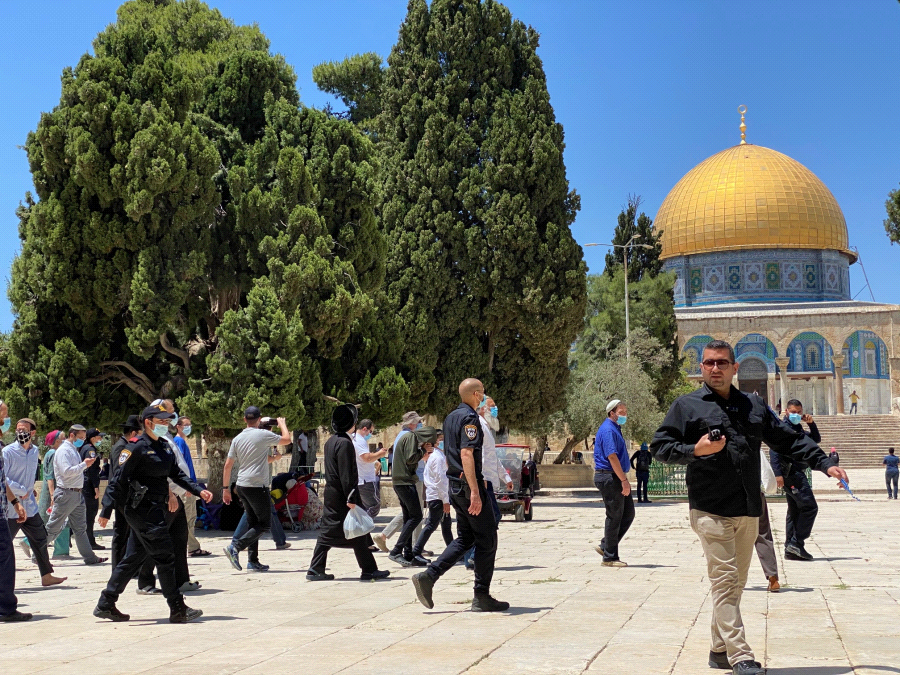 RAMALLAH, Monday, May 23, 2022 (WAFA) – A ruling by the Israeli Magistrate’s Court in Jerusalem allowing certain Jewish prayer at Al-Aqsa Mosque, a purely Muslim holy site located in Jerusalem’s old city, has drawn strong condemnation at home and abroad and warning of serious consequences. The Palestinian presidency warned in a statement against the decision of the Israeli court’s ruling considering it a serious violation of the existing historical status quo in Al-Haram Al-Sharif, which includes Al-Aqsa Mosque and the Dome of the Rock, and flagrant defiance of international law and United Nations resolutions. The presidency also warned against allowing the provocative Israeli “flags march” to take place in occupied Jerusalem on May 29. The presidency called on the US administration to immediately intervene to stop the Israeli assaults on the Palestinian people and their holy places. It also called on the Palestinian people to confront these assaults, stressing that Jerusalem, with its Christian and Muslim citizens and their holy places, will remain the eternal capital of the State of Palestine. The Palestinian Ministry of Foreign Affairs and Expatriates also strongly condemned the decision of the Magistrate’s Court allowing Jewish extremists to perform rituals and prayers inside the Muslim holy place, considering it an official Israeli coup against the status quo and changing it completely and an explicit declaration of religious war that threatens of an explosion in the entire region. The Ministry said the court’s ruling is new proof that the Israeli judiciary and court system in Israel is an integral part of the occupation regime and another evidence of providing legal cover for the incursions of Jewish extremists into the holy Al-Aqsa Mosque with the aim of consolidating its division. It said it holds the Israeli government fully and directly responsible for this decision and its serious consequences, calling on the international community, especially the US administration, for an immediate intervention to stop its implementation. Meanwhile, the Jordanian Foreign Ministry also issued a statement condemning the Israeli court’s ruling, saying this decision is null and void and has no legal weight as per international law which does not recognize Israel’s court jurisdiction over the Palestinian territories occupied in 1967, including East Jerusalem. Foreign Ministry spokesman Haitham Abu al-Fool stressed that the court’s decision is a flagrant violation of international resolutions on Jerusalem, including Security Council resolutions, all of which emphasize the need to preserve the status of the Holy City. The decision is a serious violation of the historical and legal status of the holy Al-Aqsa Mosque, said Abu al-Fool, stressing that Jordan, in accordance with international law, does not recognize the Israeli judiciary's authority over occupied Jerusalem. He warned against allowing Jewish extremists from violating the sanctity of Al-Aqsa Mosque, stressing that the Mosque, in its entire 144-dunum area, is a purely Muslim holy place and that the Waqf department, which is part of the Jordanian government, is the only legal party responsible for the affairs of the Mosque and who will be allowed to enter or visit it. M.K.