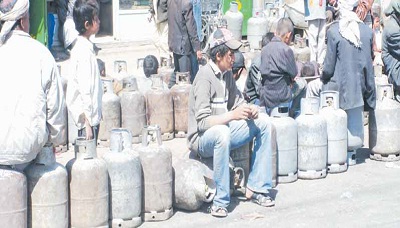 Quoting from the YPA that the United States of America, with its allies, has not only completely destroyed the Yemeni infrastructure and killed hundreds of thousands of Yemeni people, but it has secretly and openly looted the oil and gas wealth of the Yemeni people. It seems that the repercussions of the Russian-Western war in Ukraine confirming the facts that the Sanaa government has warned for seven years, about the hidden intentions of the war on Yemen, which have aimed to plunder the country’s wealth and occupied Yemen’s cities and ports, after Sanaa issued warnings about the coalition’s goals on the ground in Yemen. European Yemen. The statements issued by spokesman for the coalition forces in Yemen, Turki al-Maliki, on January 11, about the coalition launching a new military operation to transform Yemen into the new Europe, seemed to have become a tangible reality by talking about a US-French plan in cooperation with the coalition countries, led by Saudi Arabia and the UAE, to smuggle gas to Europe to fill the deficit resulting from the imposition of economic sanctions on Russia against the backdrop of the Russian-Ukrainian war. Local sources familiar with the matter in Marib told the “Yemen Press Agency” that Saudi-Emirati directives were issued to the Saudi-backed exiled Hadi government regarding the transfer of gas from Marib to Balhaf port in Shabwa, instead of transferring it to its Safer facility, which supplies the Yemeni province with gas. The sources confirmed that the goal of transferring Marib gas to Shabwa came to transfer it to some European countries, to cover the deficit in those countries as a result of the US sanctions on. France-US schemes in Yemen Last week, local and Arab media outlets revealed American and French efforts exerted to reproduce Yemeni gas for exporting it to European markets at a high rate. Meanwhile, Press reports said that the French ambassador to Yemen, Jean-Marie Safa, had extensive contacts with officials of the government of Hadi” and its governors in Hadramout Shabwa and Marib, after the “Hadi government” promised, during a visit to the city of Aden in the middle of last month, with sustainable economic support. In parallel, the U.S. Special Envoy for Yemen Tim Lenderking arrived last week at Balhaf liquefied gas export facility located on the Arabian Sea on the shores of Shabwa, accompanied by the Chargé d’Affaires for the U.S. Embassy to Yemen, Cathy Westley resident in Riyadh, and leaders from “Hunt” and “Total” companies, on a surprise visit, which contradicted the mission that Lenderking is performing in Yemen. On the other hand, Shabwa Media Center, said Lenderking held an extensive meeting with the Shabwa governor, Awadh Al-Wazir, to focus on the security and military obstacles that might hinder the production and export of liquefied gas from the oil sector 18 to the Balhaf facility. Concerns and concrete facts today have affirmed the looting of Yemen’s oil and gas wealth, as statistics indicate that Yemeni oil is being looted by six million barrels of oil, worth 165 million dollars per month. On May 12, 2021, President Mahdi al-Mashat, president of the Supreme Political Council in Sanaa, warned of the consequences of the coalition forces continuing to loot Yemen’s oil and gas wealth and smuggling it abroad. Meanwhile, Yemeni economic expert, Hassan Al-Zaidi, confirmed in previous statements that “there are major differences between the UAE and Qatar” over the extraction of Yemen’s wealth. Al-Zaydi added, “These disputes prompted the UAE to control Yemen’s gas resources and gas export sites, instead of Qatar, which dreams of controlling the Safer oil field (in Marib province) and exporting large quantities of gas through Safer or through the Balhaf port, to cover the increased demand of the world, which is growing exponentially daily.