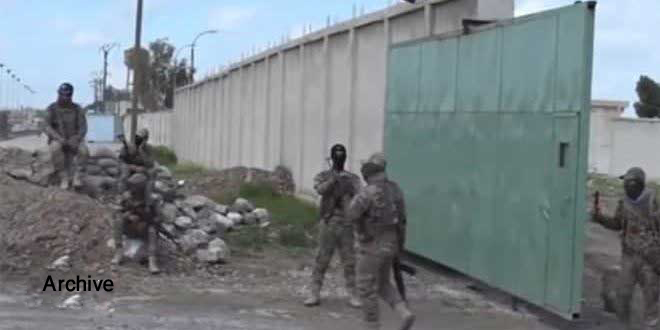 Hasaka, SANA- US occupation forces, and QSD militia transferred dozens of Daesh (ISIS) terrorists from prisons in Camb al-Bulgar, al-Shaddadi and al-Sour in Hasaka southern countryside to others ones in the northern countryside. Local sources told SANA reporter that heavily armed trucks of the US occupation forces, accompanied by SUV of QSD militia , transferred from prisons set up by the militia in Camp al-Bulgar, al-Shaddadi and al-Sour in Hasaka southern countryside to other prisons equipped to receive more prisoners in the nortern countryside of Hasaka . Sources noted that the occupation forces had taken tight security measures and blocked roads for several hours during the transfer process, while QSD militia had forced the locals of Ghweran to stay in their homes until the transfer of prisoners to the Industrial High School Prison was completed. The sources pointed out that, based on past experiences, the US forces then send these terrorists to their military base in al-Tanef area on the borders with Iraq and Jordan where they train and arm them to carry out terrorist attacks against the Syrian Arab Army positions, civilian gatherings, vital facilities and buses on the roads. Nisreen Othman / Shaza Qreima