Syria will continue to fight terrorism on its territory till eradicating it completely, Sousan says 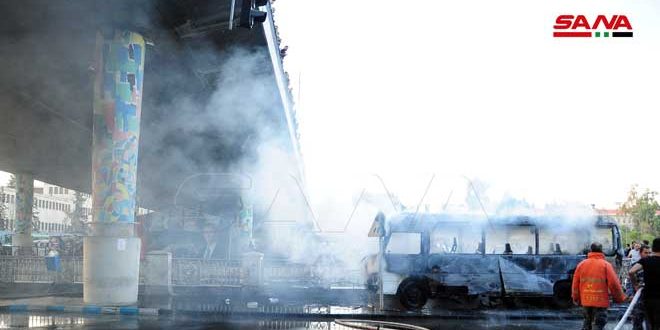 Syria will continue to fight terrorism on its territory till eradicating it completely, Sousan says

Damascus, SANA- Syria will continue to combat terrorism on its territory till eradicating it completely, Assistant Foreign and Expatriates Minister, Dr. Ayman Sousan stressed in a phone call with the Syrian Ekhbariya TV Channel. The terrorist explosion that targeted a military bus near the President Bridge in Damascus on Wednesday morning reflects despair after thwarting the conspiratorial scheme hatched against Syria and after defeating terrorism, Sousan said. He added that choosing this crowded area to carry out this coward terrorist attack affirms the criminal nature of those killers who were seeking to increase the number of deaths among innocent civilians, asserting that such terrorist crimes will not hinder the efforts to consolidate stability and security all over the country. The first one who is responsible for this heinous crime are the owners of the conspiratorial scheme hatched against Syria, on top, the Zionist entity as this scheme mainly serves “Israel” and its agendas in the region, while the ones who bear the direct responsibility are their tools who accepted to be a part of the conspiracy against their homeland, Sousan said. Sousan noted that the Foreign and Expatriates Ministry and its diplomatic missions abroad work on investing the victories achieved by the heroes of the Syrian Arab Army over terrorism, and to convey a true image about the reality of what is taking place in Syria, and the conspiracy hatched against it. He affirmed that the Arab dimension in the Syrian foreign policy is essential and what had been plotted against the region aimed to target the idea of Arabism, therefore, improving the Arab situation serves not only the interests of Syria, but all the Arab countries as it is the only way to guarantee the security and stability of these countries. He called on those who have been misled to return to their homeland and not to be a tool to implement the conspiratorial scheme hatched against it. Hala Zain