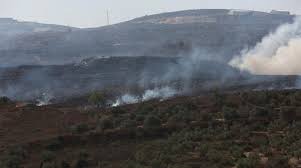 NABLUS, Tuesday, October 05, 2021 (WAFA) – Israeli settlers today set fire to olive trees in lands in the village of Jorish, to the south of the occupied West Bank city of Nablus, according to sources. Ghassan Daghlas, who monitors Israeli settlement activities in the area, said that settlers set fire to dozens of olive trees in the lands between villages of Jorish and Qusra, near the illegal Israeli settlement of Majdolim, adding that the Israeli forces are heavily present in the area. Daghlas warned against settlers’ escalating vandalism against Palestinian land now that the olive harvesting season is beginning, while also warning against targeting farmers and their lands in areas near settlements. Setters yesterday also set fire to lands in the nearby town of Burin. K.T./M.K.