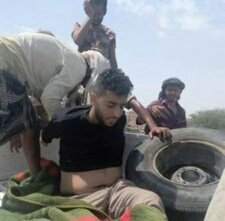 Sanaban tribes, Anas district of Dhamar province, called to stand united in confronting the forces of aggression and its mercenaries. In a statement, they held the US-Saudi aggression and its mercenaries responsible for the murder of the young man, Abdul-Malik Anwar Ahmed Al-Sanabani, at one of their points in the Tur Al-Baha district in Lahj governorate, while returning from his expatriation in the United States. The statement stressed that the siege imposed on Yemen and the closure of Sana’a International Airport are among the main causes of this crime. As well as stirring up sedition among Yemeni society, pointing out that the crime and other illegal acts practiced by the forces of aggression and their mercenaries are planned to tear the social fabric. The statement pointed out that all options will be open to the people of Sanban and Ans district, and that necessary escalatory measures will be taken if perpetrators are not arrested and brought to justice.