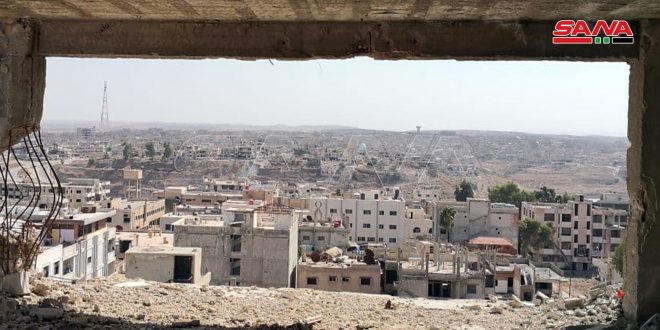 Daraa, SANA -Terrorist groups hindered the peace settlement agreement that the state put forward in Daraa al-Balad neighborhood in a scene that has been repeated several times since its implementation, with its retreat yesterday from implementing conditions previously accepted, foremost of which is the handing over the light and medium weapons to the Syrian Arab Army. A field source accompanying the settlement process told SANA reporter that two days after the opening of a center to settle the situation of wanted persons, militants, and military deserters and hand over weapons in al-Arbaeen neighborhood of Daraa al-Balad, the operation witnessed several attempts to hinder it by some of the terrorist leaders in the neighborhood, as the operation did not witness a real handover of the medium weapons. It is enough to hand over a few individual weapons. The source added that the terrorists are trying to kidnap the fate of the people in Daraa al-Balad neighborhood by using them as hostages in the settlement process on the one hand and as human shields in any military operation that the army may resort to if the peaceful settlement fails. the Syrian Arab Army units had brought reinforcements to the vicinity of Daraa al-Balad neighborhood after repeated attacks with rocket shells and explosive devices launched by terrorist groups on residential neighborhoods and army points in the city, and after the terrorists disrupted several peaceful attempts to settle the situation and expel the terrorists who reject the settlement, end the terrorist control of the neighborhood and restore the state’s service institutions to it. MHD Ibrahim/Mazen Eyon