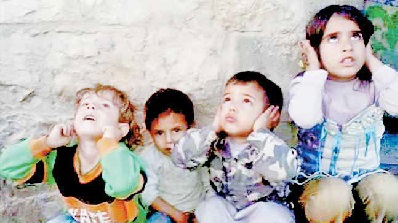 The American newspaper, The Stranger, revealed, in a report, the American role in the war and the siege against Yemen, which caused the deaths of hundreds of thousands of Yemeni children. The newspaper said: “Saudi planes cannot take off without US support,” noting that “these planes are not only using US bombs to bomb Yemen, but are also used to impose a siege that contributed to the complete destruction of the economy.” Immediately, the hashtag #Bidens_War_Still_in Yemen reached the first trend in Yemen, and social media sites buzzed with the US role. Mohammed Ali Al-Houthi, a member of the Supreme Political Council in Yemen, posted the link to the newspaper’s report on its website and commented: “Read what the Americans say about their aggression against Yemen.” “America participates in the killing of 400,000 Yemeni children” Mohammed Al-Houthi added in another tweet: The US continues to lead the US-British-Saudi-Emirati aggression and its allies in Yemen to participate in the worst humanitarian crisis in the world, which may lead to the death of 400,000 Yemeni children in 2021. Quoted from al-masirah.net.