A woman, her child injured in attack with grenade by QSD militants, Deir Ezzor countryside 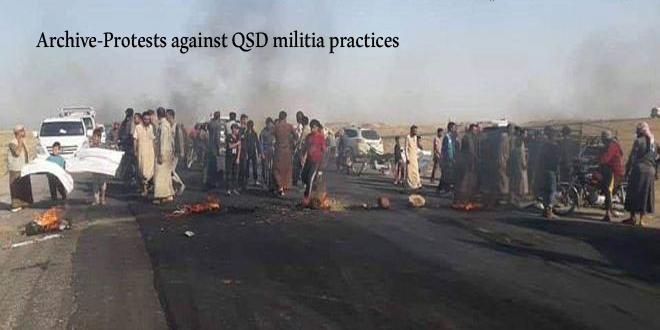 A woman, her child injured in attack with grenade by QSD militants, Deir Ezzor countryside

Deir Ezzor, SANA- A woman and her child were injured as militants of the US backed-QSD militia threw a grenade at a house in Kishkiyah town, meanwhile they kidnapped four young men in al-Sur town, Deir Ezzor countryside. Local sources told SANA that an armed group of QSD militia has encircled a house in al-Kishkiyah town, in order to kidnap its owner and take him to its positions under different pretexts, and one of the militants threw a grenade inside the house as a woman and her child were severely wounded. In the northern countryside, Local sources said that armed groups of the militia on Wednesday at dawn, carried out raiding campaigns in several houses in al-Sur town, north of Deir Ezzor city, then they abducted four civilians and took them to an unknown destination. Armed groups of the US backed-QSD militia, on Tuesday, encircled al-Ziban town, Deir Ezzor eastern countryside, and they kidnapped two persons and took them to an unknown destination. Rafah al-Allouni/ Ruaa al-Jazaeri