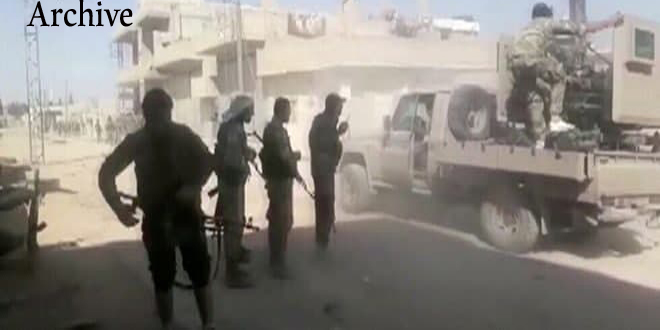 Aleppo, SANA- Turkish occupation mercenaries of terrorist organizations have continued their crimes against the locals in their areas of deployment, as they have abducted a number of civilians in Afrin city, Aleppo northern countryside. Local sources told SANA that the Turkish occupation mercenaries of the so-called “al-Jabha al-Shamiya” and the so-called “Sultan Murad Division” have imposed a crippling siege on the locals of the villages of Shkatah and Qartaqlaq in Afrin city, Aleppo northwestern countryside, as over the past hours, they have raided the citizens’ houses and kidnapped more than 30 civilians and took them to an unknown destination. The sources added that the abducted persons have been exposed to the worst forms of abuse, torture and insults since they have demanded to restore their properties which have been seized by the Turkish occupation mercenaries. The sources referred to the state of anger in addition to the poor economic situation due to preventing the locals from entering and leaving their houses and from going to their daily jobs. It is noteworthy that the Turkish occupation and its mercenaries continue to launch campaigns of raids and kidnappings in the framework of Turkish occupation’s schemes to exert pressure on the locals with the aim of displacing them, seizing their properties and fields. Rafah al-Allouni/ Ruaa al-Jazaeri