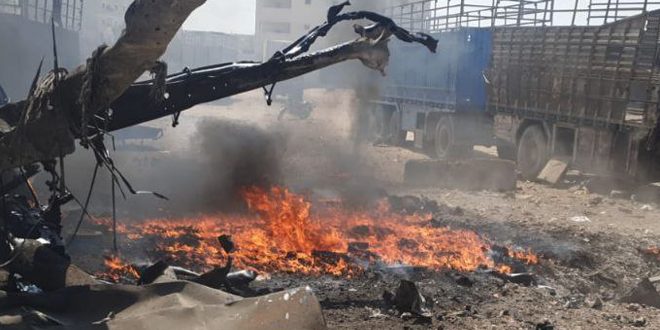 Aleppo, SANA- A number of civilians were injured in as an explosive device planted in a truck went off in Azaz city in Aleppo northern countryside where the Turkish occupation forces-backed terrorist groups are deployed. Local sources told SANA that an explosive device planted in a truck went off west of Azaz city in the northern countryside of Aleppo as a number of civilians sustained wounds of varying severity, in addition to causing material damage to the properties and the cars parked in vicinity of the explosion. The areas where Turkish regime-backed terrorist groups are deployed have been witnessing manifestations of chaos and insecurity as a result of the conflicts between these terrorist groups and their leaders. Nisreen Othman/ Ruaa al-Jazaeri