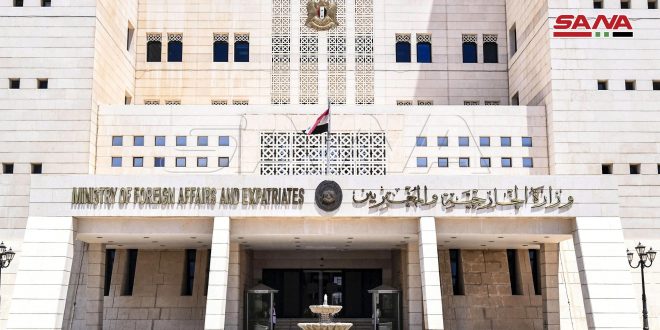 Damascus, SANA- Syria strongly condemned on Wednesday the Turkish regime’s interference in Tunisia’s domestic affairs, stressing that the Turkish policy can only support the extremist Brotherhood approach which seeks to destroy countries, fragment their national unity, and impose its abnormal agendas and policies on other countries and peoples. “While the Syrian Arab Republic affirms its respect for the sovereignty and independence of states and non-interference in their affairs, it has followed the blatant Turkish interference in the affairs of Tunisia, and it strongly condemns these acts,” An official source at the Foreign and Expatriates Ministry said in a statement to SANA. The source added that while Syria stresses the right of peoples to self-determination, it underlines its full respect for the measures recently taken by Tunisia within the framework of the constitution and it is certain that the legitimate state in Tunisia and the Tunisian people are able to go ahead towards a future decided by the Tunisians themselves without any intervention by any rogue terrorist regimes. MHD Ibrahim/ Mazen Eyon