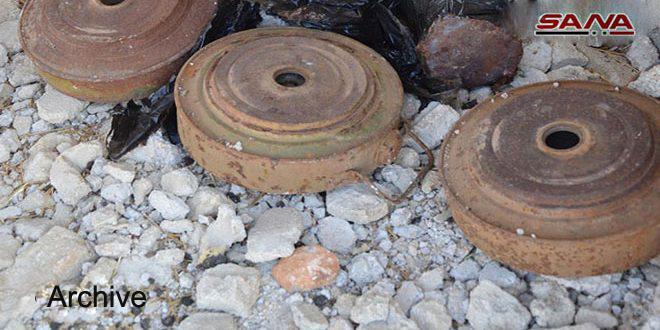 Homs, SANA- Two citizens were injured in a blast of a land mine left behind by Daesh terrorists in Jub al Jarrah town in the eastern countryside of Homs. SANA reporter in Homs said that a landmine, left behind by Daesh terrorist organization, exploded while citizens were harvesting the wheat crop in the agricultural lands of Jub al-Jarrah town, injuring two ones. Before their defeat, the terrorist organizations planted mines and improvised explosive devices in their places of deployment and hid them in villages and towns and in agricultural lands to inflict as much damage as possible to the people who return to their areas after liberating them from terrorism. Bushra Dabin/ Mazen Eyon